Vending machines can be found across cities all over Japan. As such, vending machines were a strategic asset and priority distribution channel that should be leveraged more significantly. In order to enrich the purchasing experience at Coca-Cola’s vending machines and drive channel growth, Coca-Cola Japan decided to develop a smartphone app that connects to vending machines.

In addition to the familiar Coca-Cola drink, Coca-Cola Japan sells a variety of products including water, tea and coffee to men and women of all ages. Due to the wide customer audience using Coca-Cola’s vending machines, the app had to be designed and targeted to serve a broad demographic across all age groups. Therefore, the app would need to deliver an experience that was intuitive, self-explanatory, and easy to use for all audiences. In addition, since Coca-Cola is an iconic brand, "Coke ON" should be a service brand and app that inherits and represents the "Coca-Cola brand". When developing the “Coke ON” brand strategy, we identified the three points of contact with customers "before purchase", "at the time of purchase", and "after purchase" as the most critical three moments, and defined the purpose, role and functionality that "Coke ON" should deliver at each moment in the consumer journey. To promote the app, we created a brand movie and implemented digital marketing activities using YouTubers with the aim of getting more people interested in and downloading the app. 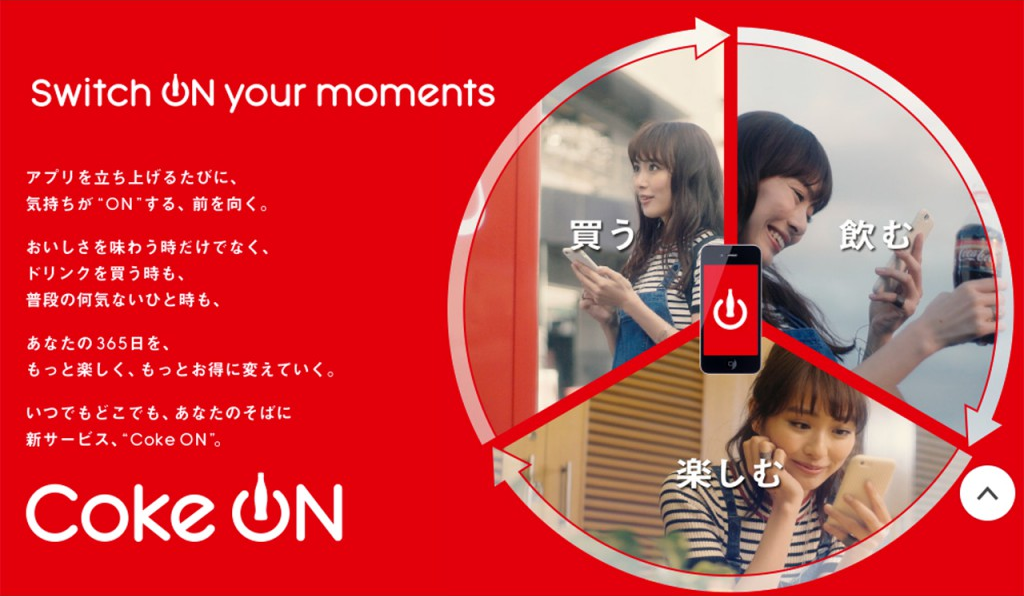 As a key element of Coca-Cola Japan’s strategy, continuous marketing investment was made and led to strong growth momentum in the number of app downloads. As of the end of July 2017, the number of downloads exceeded 10 million.